God, Dam It is a series of cyanotype imagery on topo map and found plywood. The series was installed in a stairwell, with different pieces visible on each floor. 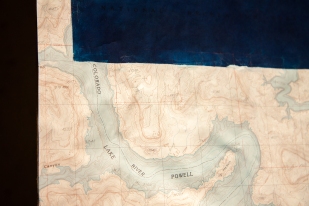 Water is dammed, diverted, ditched, and drained out of its natural path throughout the west. This series replicates and comments on the effects of the changes humans have made on Glen Canyon, Utah and other watersheds of the world with dams.

“Once it was different there. I know, for I was one of the lucky few who saw Glen Canyon before it was drowned. In fact, I saw only a part of it but enough to realize that here was an Eden, a portion of the earth’s original paradise.”